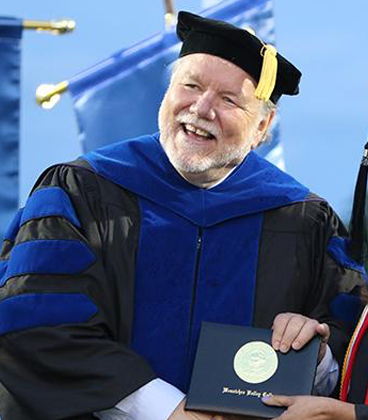 Wenatchee Valley College president Dr. Jim Richardson announced his retirement at today’s Board of Trustees meeting. He will retire on June 30, 2022.

Richardson became president of Wenatchee Valley College in July 2005. He has worked in higher education since 1976. He is WVC's longest serving president.

“Over the past 17 years I have had the privilege of working side by side with some of the most talented and committed administrators, faculty, and staff I've ever known,” he said in his statement to the board. “Today, we should celebrate that Wenatchee Valley College has come of age as a fully mature, modern, community college offering degrees that students and industries in our district need and want. …Together we've worked to make WVC the foundation on which our students and our community can translate dreams into reality.”

During his time at WVC, Richardson oversaw the development of new academic programs, grant programs and the construction of multiple new buildings.

Under his presidency, WVC obtained its first College Assistance Migrant Program (CAMP), TRIO Student Support Services (TRIO SSS) and Math Engineering Science Achievement (MESA) grants, which helped to connect the college to the broader community and supported low-income students and students of color. The introduction of these grant programs in combination with a renewed focus on diversity earned the college the designation of a federal Hispanic Serving Institution (HSI) after enrollment of students of color increased from 22% in 2005 to more than 58% in 2021.

Service to students and a focus on equity was also highlighted in the 2019 accreditation report to the Northwest Commission on Colleges and Universities (NWCCU). The commission visited WVC and commended it for supporting all students including the unique needs of non-traditional, first-generation and underrepresented students. They also said WVC creates a diverse, welcoming and inclusive environment for students, faculty and staff of all backgrounds and is responsive to a spectrum of workforce, social, demographic, economic and environmental needs.

In 2007, Wenatchi Hall was built, followed by the Music and Art Center in 2012, Hazel Allen Burnett Hall (Omak) in 2015, the Student Recreation Center in 2017, and most recently, Mish ee twie in 2021. The college went from having one of the most outdated community college classroom facilities in the state, to modernized campuses for students in all fields.

Additionally, he has helped steer the college through annual legislative sessions, a budget crisis and, most recently, a global pandemic. WVC fully transitioned instruction and student services to remote operations in a matter of three weeks in 2020. Through virtual instruction and support services, students were able to register for classes, access financial aid, get academic support, books, laptops, Wi-Fi access and food from the campus pantries.

“On behalf of the board, we want to congratulate and thank you for your work, your love and your commitment to WVC, its staff and its students,” said Tamra Jackson, board president.

Richardson has 45 years of experience in higher education. He came to WVC from West Burlington, Iowa, where he was president of Southeastern Community College. He has been an instructor, provost, dean and president at colleges across the country, as well as in China and Korea.

Richardson said he and his wife Kim will likely be returning to his home state of Wisconsin to be closer to family.

“Kim and I want to thank the Board of Trustees and the entire WVC community for the opportunity to be a part of this important work,” he said.

You can view his full bio on the WVC website.

A special board meeting will be scheduled on January 25 to discuss next steps.

WVC at Omak hosts Welcome Wednesdays every Wednesday in August